Killaloe, or Cill-da-lua, has long been a centre of religious activity. It is named after St Molua - a 6th century contemporary of St Brendan - who prophesied the future greatness of Killaloe, and whose church, St Molua's Church, stood on Friar's Island. This was submerged in the 1930's during the building of the power station at Ardnacrusha but the church itself was moved to the grounds of the Roman Catholic Church in Killaloe.

Early in the 12th century, Donal Mor O'Brien, founder of St Mary's Cathedral in Limerick and built a church in Killaloe. Between 1195 and 1225 it was replaced by the present Cathedral which was dedicated to St Flannan, an 8th century ancestor of Donal Mor. Some rebuilding work was carried out in the 19th century and a major restoration project took place in the 1960's, followed by further extensive work in the 1990's.

St. Flannan's Cathedral is part of a Western Ireland tradition of church building and dates from the transition between the Romanesque and Gothic periods. Its style is mainly Gothic but there are traces of earlier styles such as the rounded central arch of the east window which contrasts with the typical Gothic pointed arch. Built of yellow and purple sandstone the Cathedral also contains windows and carved stones from earlier churches.

The central tower, which includes the belfry, was raised twice - in 1775 and 1892. The original roof was pyramid shaped, castellations being added when the tower was raised.

The corbels or supporting stones of some of the rafters in the nave are delicately carved. One, near the pulpit, has six kilted figures embracing and kissing each other, while another is carved in the shape of a horse.
Up to the 19th century the South Transept was used as the Bishop's Court where pleas for marriage licenses were heard and penalties for various offences dealt out. A sinner had to do "a public penance in the Cathedral.....bare legged and bareheaded in a white sheet and make an open confession of his crime in a prescribed form of words". By the mid 19th century most legal jurisdiction had passed to the civil courts.

The east window is 36 feet high and is framed within three carved stone arches. It depicts Christ surrounded by his twelve Apostles. Each holds in his hand an object with which he is traditionally associated. St John, for example, holds the scriptures and a chalice. It was said that he was challenged to prove the truth of Christ's promise that " if they shall drink deadly thing, it shall not hurt them". As he went to drink from the poisoned chalice, the poison came out in the form of a serpent. 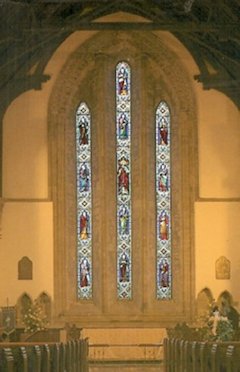