The first recorded mention of an organ in the cathedral was in 1782 when the chapter decided that “it would be for the dignity of the cathedral that an organ should be erected”. It was placed in a small gallery which surmounted a brickwork screen at the crossing. The gallery and organ were removed in 1826 but we do not know where the organ was relocated. The brickwork screen was taken down in 1877 and the present fine wood and glass screen manufactured by Messer’s John Sisk of Cork was erected in 1896.

The present organ was built in about 1900 by Nicholson & Lord of Walsall in England, at a cost of £400, and placed in its current location in the south side of the crossing. Nicholson & Lord is a reputable firm of pipe organ builders which has built many fine organs throughout the UK and Ireland, and continues in existence at Worcester under the name if Nicholson. 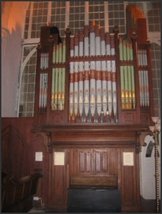 To cover the cost of the organ, a “Fancy Fair” was held at Clarisford (then the Bishop’s Palace and now a private residence – visible from the tower, on the hill behind St Anne’s Community College), which raised £300. The balance was made up through a “Grand Concert” held in Bechstein Hall in London in March 1903. There is a framed copy of the advertisement for the concert beside the organ pipes, which lists prominent patrons – including the Lord Lieutenant and the Chief Secretary of Ireland, Field Marshall Earl Roberts, the composer Sir Charles Villiers Stanford and members of the aristocracy. 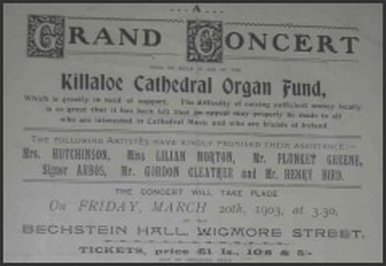 After over 60 years of service, the organ was partially rebuilt in 1966. Until then the organ had been played from an attached console within the casework where the pipes are situated in the crossing. In 1966 the organ was electrified, a new detached console was provided in the present location beside the pulpit, and the tonal specification was improved through additional stops.

The organ has two 61-note manuals, a 32-note pedal board, and at that time, 19 speaking stops, 5 couplers, and a tremulant to swell division and a total of 1,117 pipes.

In 2002 the organ received a major refurbishment and enlargement comprising re-wiring of console and action mechanism, together with replacement of relay and switching systems as appropriate, cleaning a re-voicing of pipe work and replacement of stop action motors, re-leathering of the bellows and limited tonal improvements. In this refurbishment the tonal scheme was increased to 27 speaking stops and 8 couplers, giving an increase in pipes to almost 1,500.

The organ was re-dedicated at Choral Evensong in Sunday, 24th November, 2002 and is in constant use for all Cathedral services and choir practices, special occasions, choral festivals, carol services, concerts and organ recitals. It now speaks with a more commanding voice than ever – and as it continues to proclaim God’s glory one becomes “lost in wonder, love and praise”. 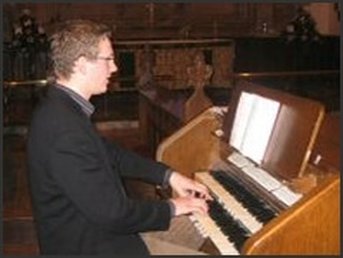